What exactly Happened in Mogeko Castle? 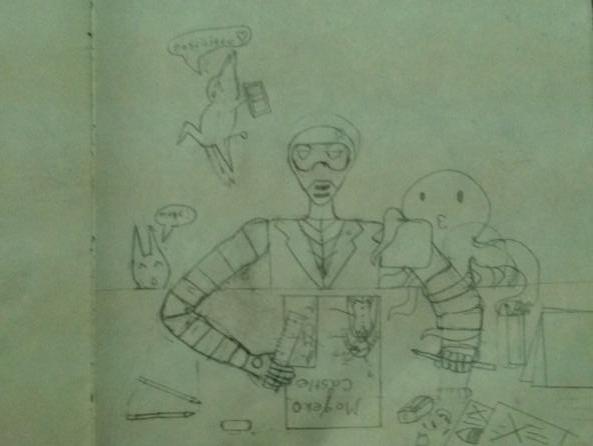 WARNING! THIS POST CONTAINS MAJOR SPOILERS FOR MOGEKO CASTLE. IT'S A GAME NOT MEANT FOR THOSE UNDER 15. AS THIS POST DISCUSSES THIS GAME, IT'S ALSO NOT MEANT FOR YOUNG READERS. READ AT YOUR RISK!

Most of you reading this probably don't know what "Mogeko Castle" is. It's a horror (?) game made using RPG Maker. It's a great game. If you haven't played it, you should. Seriously, the game's like 2-3 hours long. It won't eat up much of your time. Here's the site where I downloaded it from: http://vgperson.com/games/mogekocastle.htm

Finished? Good! Now that you've finished playing this, you're probably wondering the exact same thing I am. "What exactly happened?" What? you're not confused as to what really happened? Well, good for you. See, I really enjoyed this game. It surpassed my expectations. But as to the plot itself, the game was kinda unclear about the true ending. I've spent 2 whole days thinking, over-thinking and analyzing the story. And I've come up with a theory (actually it's a hypothesis) to at least try to explain what happened. And I'm going to share the theory with you guys!

The game begins and ends with a Mogeko telling Yonaka a story. This is the part that causes all the confusion. If the sick girl was Yonaka, than was the entire game just a story? But then how is there a Mogeko next to Yonaka? Is it a figment of her imagination? Then why did it tell Yonaka a story? In the end I came up with the following explanation.

Yonaka Kurai used to live with her brother, Shinya Kurai, away from their parents for unknown reasons. They may or may not have lived with any other relative or guardian. They were happy for a period of time. But then, something happened to her brother. He developed a split personality and started to kill small animals.

I say small animals because, it is revealed near the end of the game that Yonaka knew that his brother had a blood thirsty side. If her brother went psycho with out warning, it would mean that Yonaka would not know that he likes killing at the end of the game. Why not humans? Because if it WERE humans, Shinya would probably get arrested or hunted or something. It would really not go well with the rest of the story.

Shinya started killing small animals. Yonaka knew this. From this she came to know of her brother's blood thirsty side. She knew that it made him happy. She probably wanted to talk sense into her brother, but because she loved him so much, she didn't want to obstruct her brother's happiness.

Shinya started to become more and more psychotic and Yonaka saw the Shinya she knew and loved slowly lose to the Psycho-Shiya. This would explain why she said things like "Brother, you're back!" and "Is the old you gone now?". She still said nothing because she still didn't want to obstruct his happiness.

Then, one day Shinya tried to kill Yonaka. Yonaka loved her brother so much that she was ready to even die for his happiness. But there was a problem. She was afraid to die. So she ran away from her brother and back to her parents. Although this event had left a deep scar in her mind, she did not say anything out of her love for her brother. She probably made up an explanation and stayed quiet. This event let Shinya regain some control over himself and left Yonaka alone for a few years.

Things were peaceful again and Yonaka soon went to high school. Her mental scar never healed. Later, she heard that her brother was coming. She knew what was going to happen. Yet she refused to accept it. The day her brother was to visit, she got on the train and then on the bus and headed home. She was a little late, but whern she reached home, she saw the kitchen (?) covered in blood. Her brother told her that he had killed their parents. He also said that he was going to kill Yonaka. Yonaka, still afraid to die, ran away again.

Basically it happened here exactly the way it was shown in the last parts of the game. But when she pressed the dismount button, the bus DID stop. She went back and killed her brother. And the final scenes of the game starts. Even though Yonaka was happy that her brother was free, she had lost everything. This finally shattered her mind. She became crazy and was admitted to a mental home.

I know it seems far-fetched, it actually IS far-fetched. But I have reason for believing this. If you saved often, you most likely noticed that the pause menu changes the more you progress into the game. This, I think has a bit more meaning behind it than it appears. 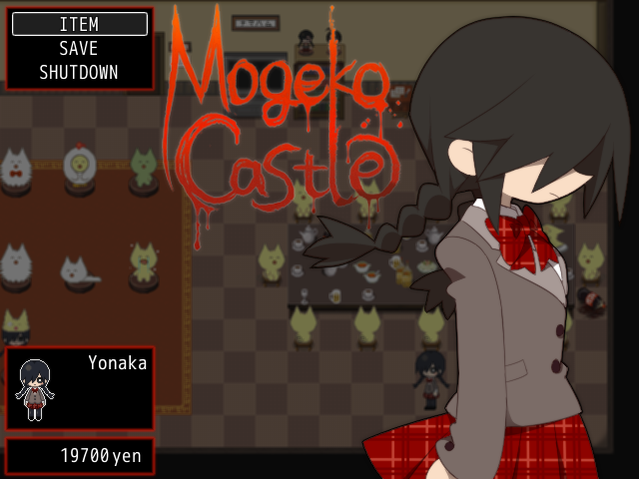 This picture of Yonaka symbolizes her worry for her brother slowly turning into a psychopath. 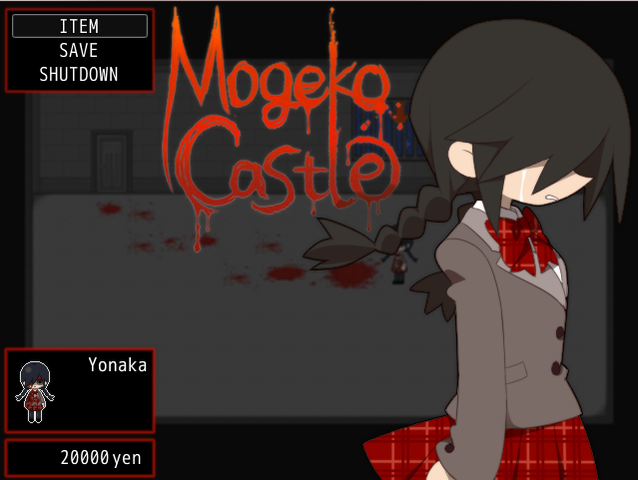 This picture symbolizes her sadness after she ran away from her brother the 1st time. 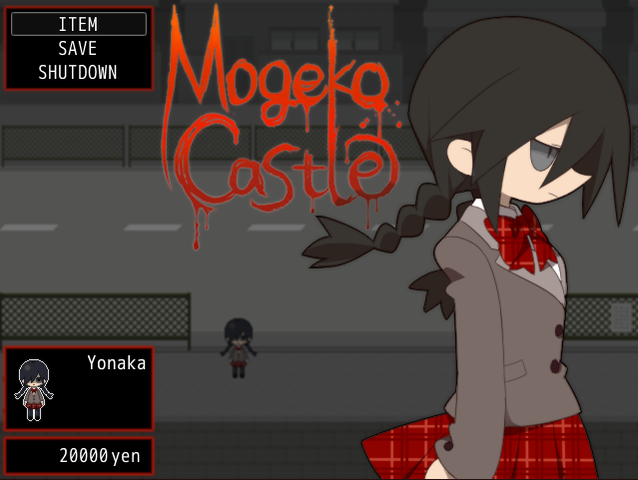 This picture symbolizes her realization of the fact that she had to kill her brother. She doesn't want to do it. But she knows that there's no other way around it. She accepted the fact that it's impossible for her and her brother to be happy together. 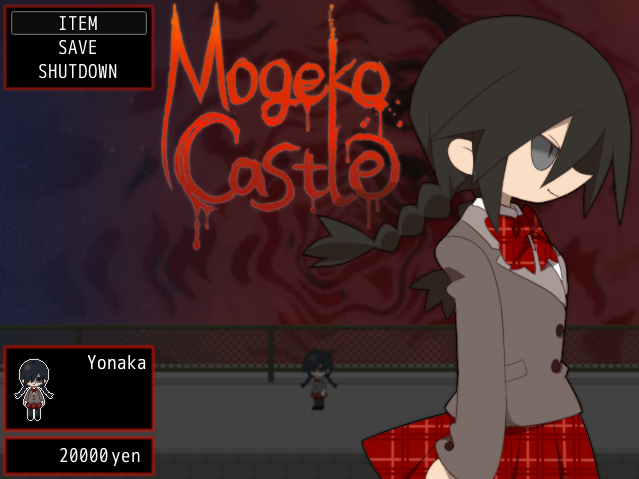 This picture symbolizes what happened after she killed her brother. Her mind is now 95% broken. She's struggling to keep it together but can't. 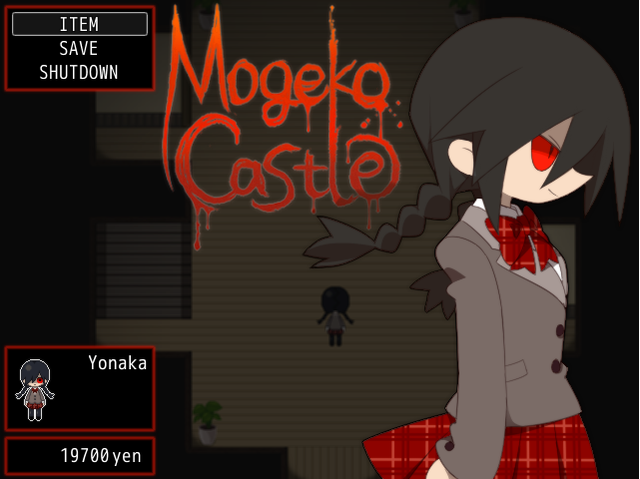 This last picture symbolizes the point when she lost all control. She's now 100% crazy.

Now where does the Mogeko castle fit in? In the mental home there was a patient. He was obviously crazy. He used to often shout "Moge" or "Mogeko". He would sneak in to Yonaka's room (or they could've been kept in a the same room. I really don't know how mental homes work.) and would tell her crazy stories and say crazy things. He would also have his way with her from time to time. This is where Mogeko Castle comes in. Mogeko Castle is nothing more than a figment of Yonaka's imagination. It was created by her shattered psyche.

Each of the main characters within the castle are a representation of various traits that Yonaka once had. The entire journey we take in the game is a hallucination (or a dream) created by her mind. The real world sections of the game are some of the last things Yonaka did on the day when she had to kill Shinya.

Like I said before, each of the characters you interact with are representations of various traits that Yonaka once had.

The mogekos and King mogeko are representations of the mental patient that sneaks into her room. This is why they act so crazy and are always trying to rape her.

Moge-ko is a representation of Yonaka's rage and insanity.

I'm actually confused as to what Nega Mogeko represents. I think he represents Yonaka's will power and determination.

Blood Spirit is a representation of Yonaka's shyness.

And Hasu is a representation of Yonaka's devotion.

At this point my theory enters the realm of random guessing. See, if this was a regular RPG, items wouldn't be a problem. There are very few item types throughout the whole game and all these items are utterly useless. If this was your normal RPG, I would've said that these items were there to not make the game impossible. But here the items serve no purpose what so ever. I can guess what some items represent, but the others are beyond me.

Well this is my theory as to what really happened in Mogeko Castle's plot. You may have noticed this, but there are some huge holes with this theory. For example, I couldn't give an explanation as to what Somewhat Strange Mogeko, Prosciutto fairy, Mogecuckoo or Moffuru represent. It also has a few flaws as why and how Yonaka snapped and end up in a mental home.

You could argue that everything will be clear in Mogeko Castle Gaiden. Personally, I couldn't care less. You see, if the creator of the game did something as simple as writing "Coming Soon, Mogeko Castle Gaiden." on a black background, I would've been interested. But because of the whole trailer bit they forced at the end, it actually made me not want to play Gaiden. Nice job Deep-sea. Nice job *sarcasm*.

Anyway, until the creator actively says something, what I've said is nothing but my analysis.

It's just a theory... A GAME THEORY! (As Matpat would say)

Post Script (Added 24 December 2016): Hello there. You may or may not know this but, I had a blog on Wordpress before this but due to technical difficulties, I'm forced to move all my old content here before I delete that blog.

This theory is really old and really flawed. So if you want a better theory, I suggest checking this out:
https://frostyflytrap.wordpress.com/2015/10/31/mogeko-castle-analysis-mature/

After you're done reading that, you can read my follow-up theory to it here:
http://zulkrs.blogspot.com/2016/12/re-frostyflytraps-mogeko-castle-analysis.html

Both of these theories are vastly superior to this one.
Thank you for your time
Zulk-RS
By Zulk-RS at 9:45 PM

Zulk-RS
Welcome to my new blog. You can contact me by email or check me out here: Facebook: https://www.facebook.com/profile.php?id=100004177514848 Youtube:https://www.youtube.com/channel/UCMRum7HtfR398x_mSfQmk0A Doomworld:https://www.doomworld.com/vb/members/Zulk-RS/